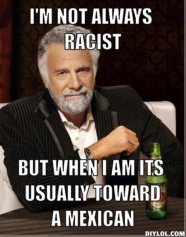 That is the question.

First of all for those of you who haven’t realized it, yes there’s a difference! No you can’t just clump all of the Hispanics, Highspanics*, Latin@s, Mexican@s, etc. into one neat category no matter how great this looks on your form or application. Just because we look the same to you – i.e. narrowly viewed as short, round, and brown to the myopics – we come in all shapes, sizes, colors, intellects, and various political walks of life. No we won’t all be voting for Susana la ____________ (fill in the blank with your favorite word) and no we’re not all related despite what you think. The Gonzales from el Norte aren’t related to the Gonzalez from Durango.

There are actually huge differences in thinking you’ll encounter depending on where you’re at and who you’re talking to (referred to as ideology in academic-speak). Take for example the Hispanic/Highspanic debate. Los Highspanics, many of whom share similar patterns of thought, eating habits, and familial lines, have come to distance themselves from not only their Hispanic prim@s, but very much so from their distant Mexican@ second cousins. In fact, many of los Highspanics will straight out deny a possible familial relationship to many of us falling on the lower rungs of the Highspanic ladder.

Oh no? You don’t believe me? Well put it to the test. Find a well-to-do or super proud Highspanic and ask them in the most naïve tone you can muster – “Hey… wasn’t your abuelita from Mexico?” or “Have you visited your family in Chihuahua lately?” Then take note and observe how their faces will automatically react with ever so slight or unabashed aversion (which they can’t even control) to your so ignorant questions. “What? I’m not Mexican!” said in an indignant totally offended tone quickly followed by “I’m Spanish!”

Ever since my abrupt introduction to Highspanic thinking, I’ve always been very interested in how their brain waves have come to be wired. Although it never feels good to be looked down upon by gente who look like me (are you sure you’re not my prima?), I have also come to understand the history and oppression behind the mindset and use of term. After reading and researching the stories behind New Mexico’s quest for statehood and the ignorant stigma that became associated with “Mexican,” I understand my prim@s when they run from my Mexicananess.

So all of this to say, watch out with what term you use to identify brown folks. Don’t you dare call me Hispanic and especially not Highspanic and good luck to you if you mistakenly call a Highspanic a Mexican! Ajua!

*Some helpful clues to identifying a Highspanic: Many lack an identifiable accent after years of training themselves in White-speak; usually hold administrative and/or political positions; can be found in large numbers during the legislative session; live in the NE Whites (get it?); and are mostly pro Susana with a crazy outlier here and there.