Chale with the Confused Democratas… 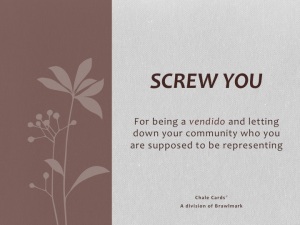 Thanks to the Creator the legislative is now over. It was a tough one for so many of our community groups and organizations who dedicate their time up there amidst the madness of the session.

In many of our platicas about these long, hard political battles someone would always end up making the comment about la Susana and the rest of her Republican crew. As soon as the comment was made, my body would react and out of my mouth would spew – “But it’s our own fault gente!” “Why are those fregad@s in their positions to begin with?” “Yeah that’s right, because many of our gente didn’t care enough to vote!” My short tirade would end with “It’s our own damned fault!”

Complete silence and discomfort until someone would carefully and cautiously move on to the next topic.

Before any of you go off, the other part of me also understands why many people flee from the political scene and why so many have become disengaged. Hard question: Have our Democrats proven to be any better? The answer I realize is not so straightforward.

Take our own battle with water rights as a prime example of why many people end up decepcionados and eventually disengage (except for the handful of locos that continue because of their own die-hard commitment, personality type, or their own political agendas). During this session we tried to pass a memorial that called for a temporary moratorium on large developments due to the uncertainties we continue to face because of severe drought conditions in our state and region. We managed to get it out of its first committee thanks to the support of our ally Democrats and the fact that a couple Republicans were awesome-ingly missing that day. During the second committee it was expected that all of the Republicans would vote in opposition of our memorial so we were counting on our Democrats to see us through. They are more rational right? They would understand our fight to preserve precious water rights and agricultural traditions right?

Well [NO] thanks to a Democrat from el Norte our memorial died a cruel death there in committee. Yes thanks to a Democrat and not any ole Democrat but one that looks and sounds like those of us who were present to support the memorial. Even more painful was knowing that this particular Democrat should have readily understood how this battle relates to the preservation of las acequias. Chale!

So our group can rightfully say that thanks to a Democrat, our legislation did not make it to the Senate floor. Repeat: a Democrat. Highlight: a Raza Democrat.

Yes I know not all of them are cut from the same cloth and I do want to honor los Democratas who did stand in firm support of the people. But all it takes is one to overturn the power of the others. Talk about the Republican wolf hiding in the Democratic sheep’s clothing, uh.

So I understand why my own mother hasn’t voted. Last time I was bugging her about it she said in a sharp tone signaling for me to drop it or else: “Pa que voy a votar? Que me gano? Todos son iguales!”

After our own let down last week I made sure to relay the story to la madre and for the first time in years she seemed to listen, understand, and not automatically react. She didn’t even say anything back when I said that next time I would take her to the polls even if it was by force.

So Mr. Democrat from el Norte check your mail because soon you will be receiving una notita from my soon to launch line of greeting cards called SCREW YOU Cards.